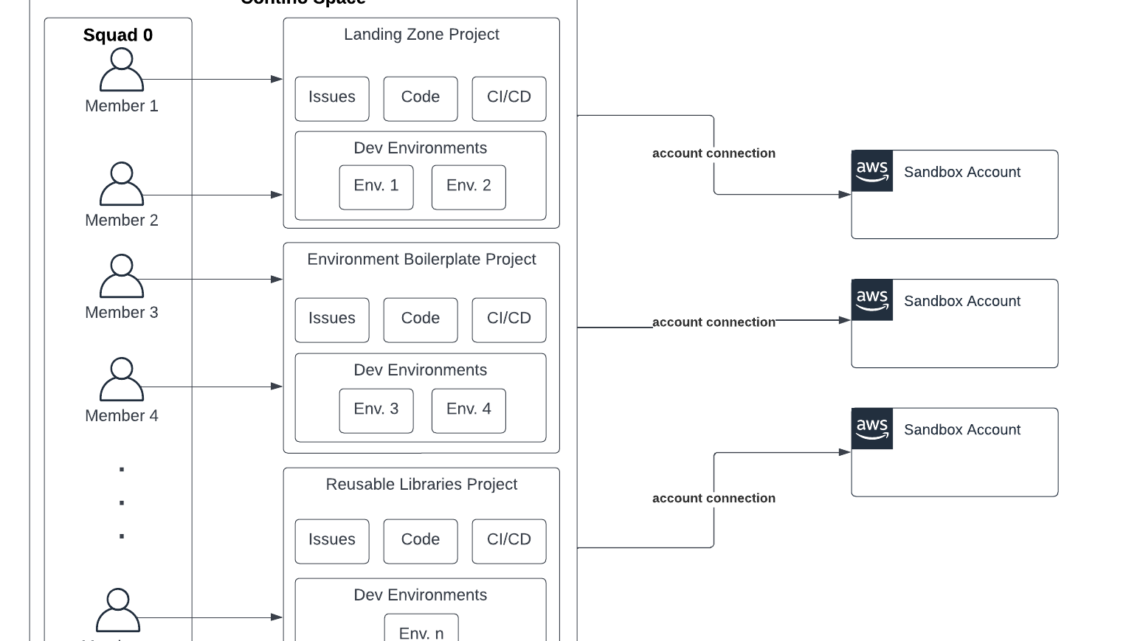 Amazon CodeCatalyst is a modern software development service that empowers teams to deliver software on AWS easily and quickly. CodeCatalyst provides one place where you can plan, code, and build, test, and deploy applications with continuous integration/continuous delivery (CI/CD) tools. It also helps streamlined team collaboration. Developers on modern software teams are usually distributed, work independently, and use disparate tools. Often, ad hoc collaboration is necessary to resolve problems. Today, developers are forced to do this across many tools, which distract developers from their primary task—adding business critical features and enhancing their quality and completeness.

In this post, we explain how Contino uses CodeCatalyst to on-board their engineering team onto new projects, eliminates the overhead of managing disparate tools, and streamlines collaboration among different stakeholders.

Contino helps customers migrate their applications to the cloud, and then improves their architecture by taking full advantage of cloud-native features to improve agility, performance, and scalability. This usually involves the build out of a central landing zone platform. A landing zone is a set of standard building blocks that allows customers to automatically create accounts, infrastructure and environments that are pre-configured in line with security policies, compliance guidelines and cloud native best practices. Some features are common to most landing zones, for example creating secure container images, AMIs, and environment setup boilerplate. In order to provide maximum value to the customers, Contino develops in-house versions of such features, incorporating AWS best practices, and later rolls out to the customer’s environment with some customization. Contino’s technical consultants, who are not currently assigned to customer work, collectively known as ‘Squad 0’ work on these features. Squad 0 builds the foundation for the work that will be re-used by other squads that work directly with Contino’s customers. As the technical consultants are typically on Squad 0 for a short period, it is critical that they can be productive in this short time, without spending too much time getting set up.

To build these foundational services, Contino was looking for something more integrated that would allow them to quickly setup development environments, enable collaboration between Squad 0 members, invite other squads to validate foundations services usage for their respective customers, and provide access to different AWS accounts and git repos centrally from one place. Historically, Contino has used disparate tools to achieve this, which meant having to grant/revoke access to the various AWS accounts individually on a continual basis. With these disparate tools, granting access to the tools needed for squads to be productive was non-trivial.

It was at this point Contino participated in the private beta for CodeCatalyst prior to the public preview. CodeCatalyst has allowed Contino to move to a structure, as shown in Figure 1 below. A Project Manager at Contino creates a different project for each foundational service and invites Squad 0 members to join the relevant project. With CodeCatalyst, Squad 0 technical consultants use features like CI/CD, source repositories, and issue trackers to build foundational services. This helps eliminate the overhead of managing and integrating developer tools and provides more time to focus on developing code. Once Squad 0 is ready with the foundational services, they invite customer squads using their email address to validate the readiness of the project for use with their customers. Finally, members of Squad 0 use Cloud 9 Dev Environments from within CodeCatalyst to rapidly create consistent cloud development environments, without manual configuration, so they can work on new or multiple projects simultaneously, without conflict. 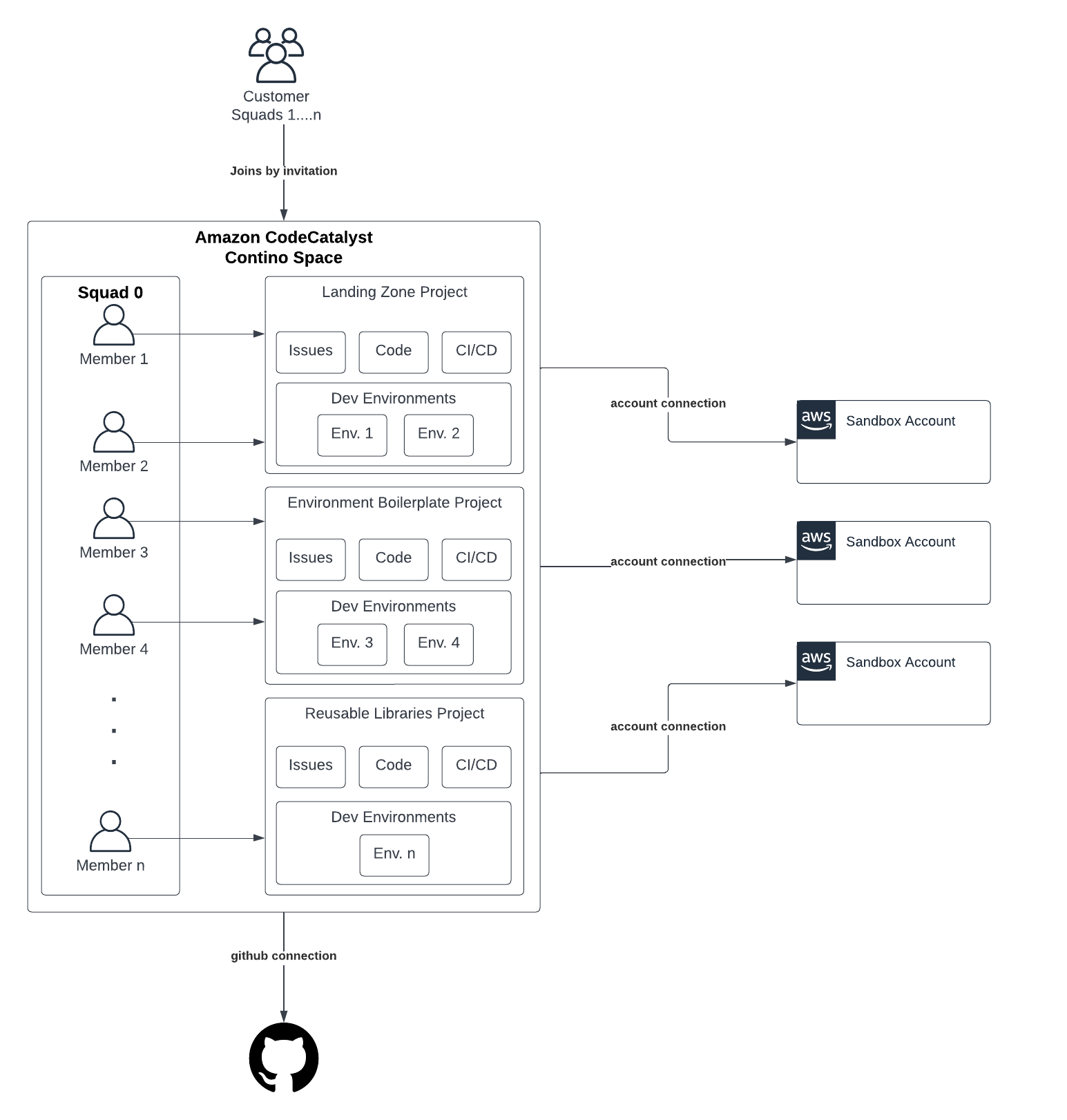 Contino uses CI/CD to conduct multi-account deployments. Contino typically does one of two types of deployments: 1. Traditional sequential application deployment that is promoted from one environment to another, for example dev -> test -> prod, and 2. Parallel deployment, for example, a security control that is required to be deployed out into multiple AWS accounts at the same time. CodeCatalyst solves this problem by making it easier to construct workflows using a workflow definition file that can deploy either sequentially or in parallel to multiple AWS accounts. Figure 2 shows parallel deployment. 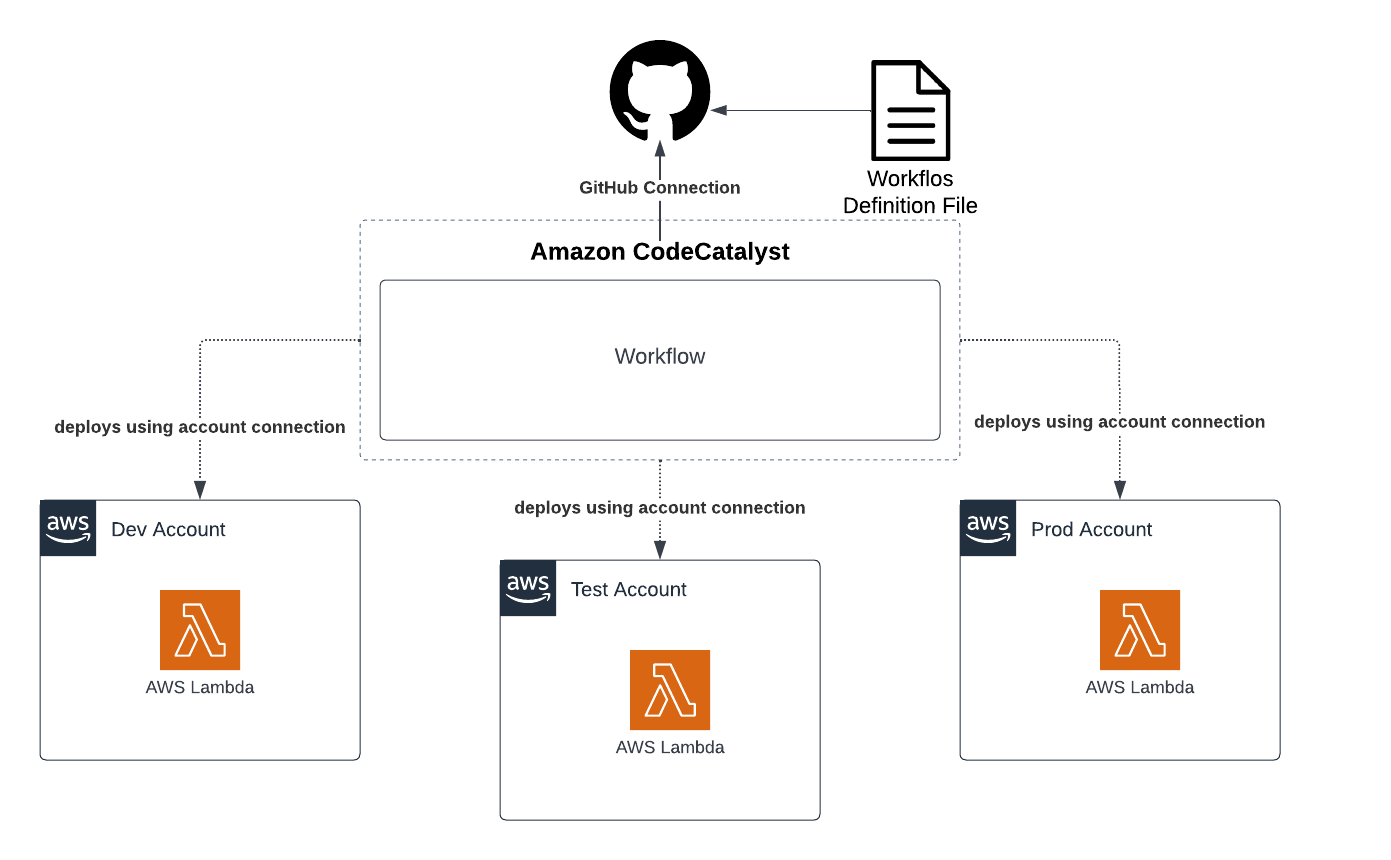 CodeCatalyst has reduced the time it takes for members of Squad 0 to complete the necessary on-boarding to work on foundational services from 1.5 days to about 1 hour. These tasks include setting up connections to source repositories, setting up development environments, configuring IAM roles and trust relationships, etc. With support for integrated tools and better collaboration, CodeCatalyst minimized overhead for ad hoc collaboration. Squad 0 could spend more time on writing code to build foundation services. This has led to tasks being completed, on average, 20% faster. This increased productivity led to increased value delivered to Contino’s customers. As Squad 0 is more productive, more foundation services are available for other squads to reuse for their respective customers. Now, Contino’s teams on the ground working directly with customers can re-use these services with some customization for the specific needs of the customer. 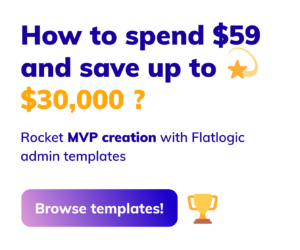